Kuwait Book Fair: «The march of a homeland» 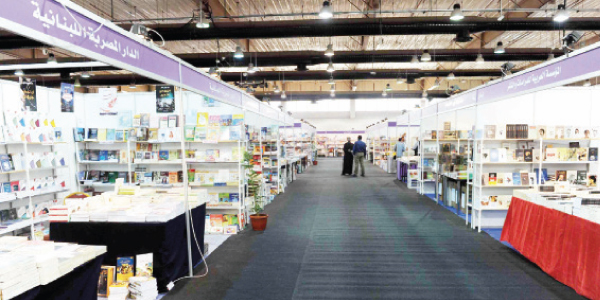 The 41nd Kuwait Book Fair, which will be held from 16 to 26 November, will begin on Wednesday. As usual, many events and symposia are held as companion activities, which can be said to be an attempt to enrich the cognitive side of the book, which is the first symbol. These activities are distributed on a morning and evening basis. On the first day, the Amal Al Rundi Workshop "Strengthening the Spirit of Belonging" will be held in the morning and will last for three days. In the afternoon, there will be a lecture by Sheikh Jaber Al-Ahmad. Dr. Nada Al-Mutawa Banyan Turki and the session is run by Kamel al-Abd al-Jalil. And then followed on the same day lecture «Abdul Aziz Al-Sumait .. a man with a nation» and lectured by d. Abdul-Mohsen Al-Kharafi and Fahd Al-Hasawi and the session is chaired by Fahad Al-Abd Al-Jalil.

An enlightening lecture
On Thursday or the second day of the exhibition, two lectures will be held in the morning. The first is an enlightening lecture on petroleum culture in cooperation with the Ministry of Oil, followed by a lecture entitled "Discovering Oil in Kuwait". In the afternoon of the same day, there is a celebration of the journal Al-Bayan on the occasion of the passage of half a century of its issuance, which lectures in the first seminar d. Sulaiman Al-Shatti and Abdul Aziz Al-Musallam (UAE); Abdel Rahim Allam (Morocco), chaired by Talal Al Rumaidi. The second event in the celebration is a poetry evening in which Dr. Khaled Al-Shayeji, Habib Al-Sayegh (UAE), Walid Al-Qallaf, Sameer Atiya (Palestine), Waha Al-Hasawi, and Amal Abdullah.

Al Bayan Celebration
On Friday, another event will be held in the evening for Al Bayan Festival, in which Abdullah Khalaf will participate. Rashid Najm (Bahrain), Medhat Allam, and the session is managed by Lafi Al-Shammari. Followed by a poetry evening run by Khalaf al-Khatimi, with the participation of Murad Rizkallah Al-Sudani (Palestine), Abdullah Al-Failakawi, Fawaz Al-Shorouki (Bahrain), Samir Darwish (Egypt) Omar Kaddour (Sudan).
On Saturday, in the evening, a symposium "Efforts of King Abdulaziz University in the preservation of libraries of individuals". Presented by Dr. Dr. Ayman Al-Henihan (Saudi Arabia) Hamad Al-Anqari (Saudi Arabia). And a lecture by the translator Saleh Almani entitled "Cultural Exchange and Human Coexistence. Translation in Latin America is a Model". The session is moderated by Dr. Fahd Al - Mutairi.

Kuwaiti - Lebanese Relations
On Sunday, the first lecture entitled «Reading in the history of Kuwaiti-Lebanese relations», where the secretary of editing Qabas colleague Hamza Alayan and managed by Hamid Al-Hamoud. And a lecture entitled "Modern Technology and its Impact on Contemporary Cultural Reality". Lectures by Dr. Nasser Al-Manea, Mohammed Al-Husseini, Ahmed Haider, and managed by Sulaiman Al-Abdalhadi. The symposium "The aesthetics of Ottoman literature" is the second symposium on the same day, Ayed Al-Jarid and lectures by Mohammed Harb and d. Mustafa Alstiti.
On Tuesday, there is a lecture entitled "The New Spirit of Quranic Miracles in Our Times", which is spoken by Farouk Abdulaziz and directed by Hamad Al Nashmi. Then «the young book between the horizon of experimentation and the possibilities of success», which is a symposium that speaks of the admirer Shammari and Mashari slaves and Fahd return and is managed by Abdulaziz Mal Allah.

Identity transformations
«Cultural Identity and Transformations in Contemporary Arab Consciousness» is a lecture on Wednesday, Mohammed Al-Dabaa and Dr. Shaker Abdul Hamid and directed by Ibrahim Farghali.
On Thursday there are two lectures, the first entitled «US-Gulf relations under the law of Alasta». Speaking in this lecture d. Abdullah Al-Shayji and Dr. Ahmed Samadan, and managed by Dr. Abdullah Al Jasmi. And then a lecture on the cultural experience of Katara run by Ali Masoudi and the speaker is d. Khaled Al Jaber.
The last session of the exhibition is the Friday evening entitled "Kuwait TV History and the tales of 1961-1985, for the media Mohammed Al Sanousi.