At the end of the Kuwait Book Fair, the publishers "breathe" 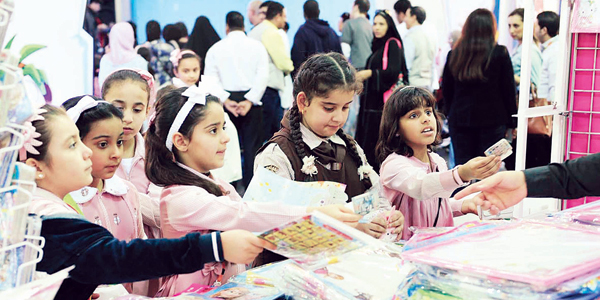 Over the course of the 41st Kuwait Book Fair, school students were the biggest attendees on organized school trips in the morning. Interestingly, these students of all ages were keen to acquire as many books as possible, reflecting the efforts of these schools in reading To educate students.
Al-Qabas observed the general atmosphere in the exhibition and met with a number of publishers who praised the supervision of the Ministry of Information during this year, stressing that they have witnessed a distinguished cooperation this time from censorship in facilitating the affairs of publishers to allow publication of books in different roles. In writing after this remarkable cooperation by censorship.
And the demand of readers, they have agreed that the evening period is witnessing more movement and demand than the morning period, demanding the management of the exhibition to extend the time in some days that are witnessing a great presence, because administrations in the Gulf Book Fair, and perhaps also Arab, extending the time on the day Intensity in attendance.
For his part, the director of Kuwaiti Platinum House, Jassim Ashkanani, said that the organization of the exhibition during this year was remarkable in view of the past years, adding that the turnout on the first day was a bit weak, but generally on the first day is not judged on attendance, The number of attendees increased beyond the second day, and turnout was good, as publishers expect.
However, Ashkanani predicts that the number of attendees on the last day, especially from the days of the Book Fair will be weak, because of its synchrony and the elections of the National Assembly and citizens to the ballot boxes on the same day, hoping at the same time not to cut the election day from the opportunity to attend the exhibition.