Opening of the Kuwait International Book Fair in its 42nd session 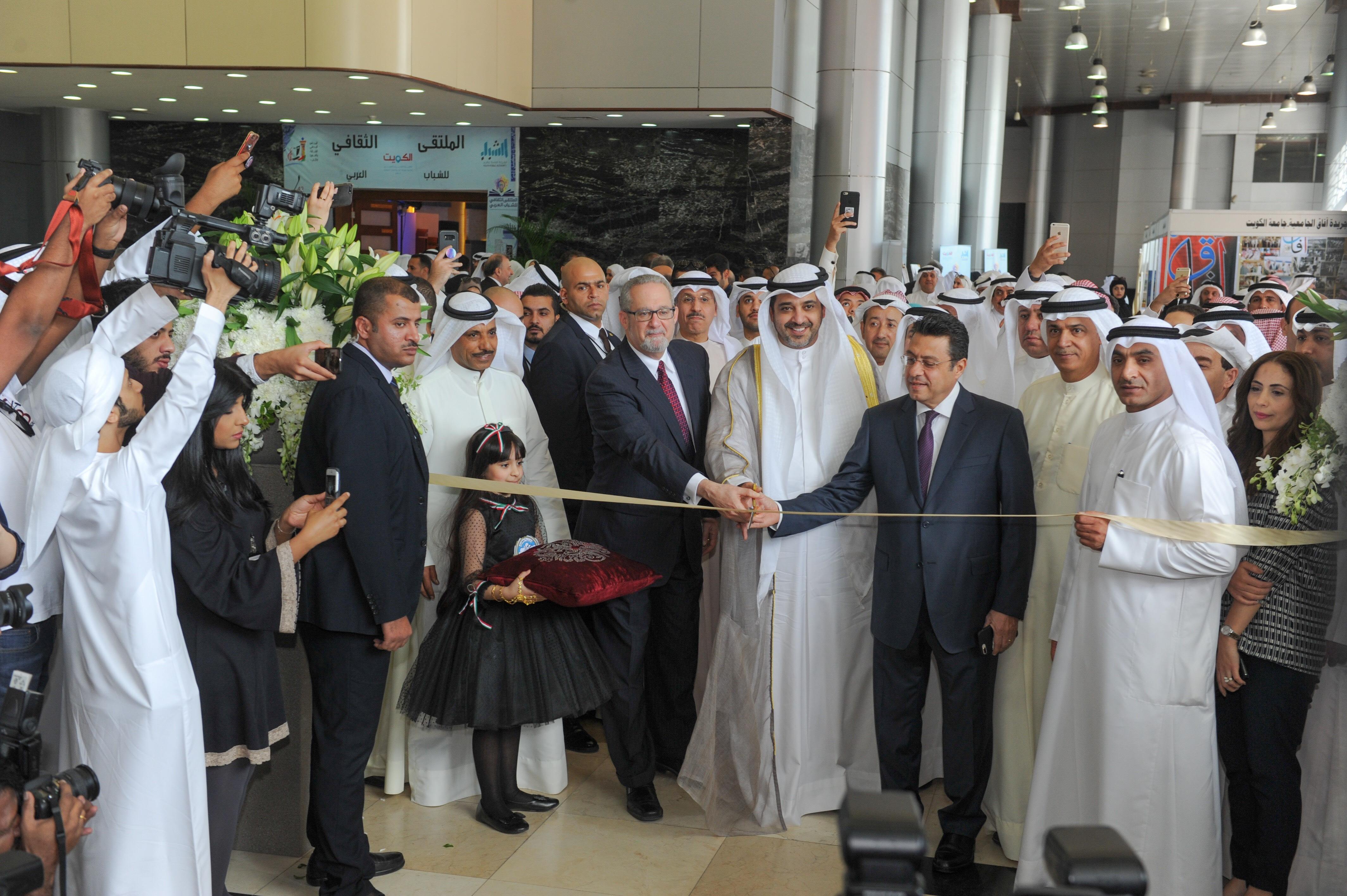 Minister of State for Cabinet Affairs and Acting Minister of Information Sheikh Mohammed Al-Abdullah said the opening of the 42nd session of Kuwait International Book Fair on Wednesday marks a distinctive mark of the Kuwaiti cultural scene.
In a press statement on the sidelines of the opening of the exhibition, Al-Abdullah said that the exhibition, which began its career in 1975, continues with the same momentum and development.
He added that this important exhibition has become part of the Arab cultural calendar in the size of its publications and the quality of its supply. He pointed out that the participants in this year's exhibition reached about 500 publishers, 50 of which are participating for the first time in this exhibition. The participating role represents 30 countries and offers more than 11,000 titles new.
The success of the previous sessions and the increase in the number of States and publishing houses participating year after year underscored the faith of the leadership, the Government and the people of Kuwait in the democratic opinion and responsible freedom of expression guaranteed by the Constitution of the State of Kuwait as a consistent approach to development and progress.
He pointed out that this year's exhibition coincides with the occasion of the selection of Kuwait as the capital of the Arab youth 2017, pointing out that they are two occasions that promote Kuwait's cultural status of interest in culture and youth together.
Al-Abdullah said that these two occasions are receiving the attention of His Highness the Amir Sheikh Sabah Al-Ahmad Al-Jaber Al-Sabah, His Highness the Crown Prince Sheikh Nawaf Al-Ahmad Al-Jaber Al-Sabah and HH the Prime Minister Sheikh Jaber Al-Mubarak Al-Hamad Al-Sabah.
He pointed out that the book is a means of supporting culture and dissemination of knowledge through the sessions of the Kuwait International Book Fair and seasonal exhibitions held by the National Council for Culture, Arts and Letters.
Al-Abdullah said that the activities accompanying the exhibition are an innovative way to support and strengthen this event by transforming this exhibition into an intellectual and cultural platform that allows for the free exchange of ideas and ideas among intellectuals, intellectuals, writers and artists.
The exhibition, in turn, supports enlightened and constructive thought to counter the ideas of extremism, extremism and terrorism and promotes tolerance, love and brotherhood between the youth and youth sectors in particular.
He praised the management of the exhibition to allow many young publishing houses to participate in the exhibition as a practical application of the great attention that the State of Kuwait attaches to this important segment.
Al Abdullah praised the efforts of exhibitors from Kuwait and other countries in the hope that the public will interact with this cultural exhibition and continue to advance to become the most important exhibition in the region.
For his part, exhibition manager Saad Al-Anzi said in a press statement that the exhibition will continue until 25 November and provides services to the public that will facilitate the purchase of books, including providing automatic query service for books and publishing houses in the exhibition.
Al-Enezi added that the exhibition management is available in the National Council of Culture's version of the exhibition. The application of the Kuwait Book Fair on smart phones is also available with the operating system "Android and IOS".
Al-Anzi praised the patronage of His Highness the Prime Minister Sheikh Jaber Al-Mubarak and the organization of the National Council for Culture, stressing that the exhibition highlights the cultural role of the State of Kuwait as an opportunity to meet those responsible for cultural affairs and writers, writers and intellectuals.
The exhibition is considered one of the most important Arab exhibitions, and it is the second oldest Arab book fair. Arab publishers are keen to participate in this exhibition and meet with Kuwaiti readers and residents on this good land of educated elites who are keen to acquire all new local, Arab and foreign publications.
He pointed to the keenness of the General Secretariat of the National Council for Culture through the conference to create an atmosphere of literary and cultural enrichment and knowledge between the publisher and reader in addition to activating the economic movement of the book industry locally and Arab.
He said that this year's exhibition is accompanied by a diverse cultural program that comes in line with the literary and cultural movement in Kuwait. The cultural program in the cultural café in the hall includes 6 lectures, workshops, intellectual evenings and visual shows.
The Kuwait Foundation for the Advancement of Sciences (KFAS), which is sponsoring the scientific festival "Al-Jahiz and the Animal Book", will be participating in the exhibition throughout the exhibition, a distinguished educational and scientific festival.
The exhibition will also feature a photography exhibition with more than 100 young, amateur and professional photographers, as well as the "Caricature Exhibition".
On the sidelines of the exhibition there will also be an exhibition of the seals of Delmonia and photographs of artifacts accompanied by a workshop for children on the seals and manufacture of Delmons.
Hall No. 5 has been allocated to the Arabic publishing houses while Hall No. 6 will be for the local, Gulf and foreign publishing houses, as well as the cultural café. Hall No. 7 is reserved for the child and their publishing houses.